Travelling interstate meant one thing. Doughnuts. Krispy Kremes at the airport provided the kinds of deliciousness you could never dream of finding at your local Wendy’s or Donut King. Cinnamon and jam donuts have always been the mainstay of the doughnut kingdom, with the cream filled doughnut even popping in here and there. But the last few years especially has seen artisan bakeries getting their groove on, and adding a bit more finesse to the filling.

The doughnut or donut is deep fried flour dough that comes as a ring doughnut or the filled doughnut which is then injected with plenty of creamy filling goodness. The Dutch first started making olykoeks or ‘oil cakes’ in the early 1800s where balls of cake were fried in pork fat and stuffed with fruit or nuts in the middle. It was difficult to cook to the middle, until in 1847 when American ship captain Hansen Gregory punched a hole in the centre, fixing the gooey uncooked part. The donut continues to reign supreme in bakeries worldwide: a bakery just isn’t a bakery without one! And there really is no better way to warm up than with one of the cinnamon-y delicious doughnut family members. Inspired by International Doughnut day, MYCITYLIFE explores the top doughnuts in The City. It’s a tough job, but someone’s gotta do it.

A true doughnut fans life’s purpose is to experience the full spectrum of fillings and flavours. Make Wednesdays and Thursdays at Flour & Chocolate a staple in your weekly schedule. Their European style doughnuts range from divine salted caramel to apple crumble and the more traditional raspberry jam are the absolute best in town. For those who like to keep it simple, the classic cinnamon sugar is always the pick. And home to the best cronuts in Brisbane, F&C have your dough bun tastes sorted where you can enjoy their take on Dominique Ansel’s croissant doughnut hybrid with the chocolate or white chocolate options. Closer to the CBD, the cronut can be delivered to your executive suite like a dream come true, when you book yourself in to the Marriott Brisbane.

Creative twists on the traditional doughnut have resulted in no two venues delivering the same experience. From Newstead, The Newstead Brewing Co menu introduces the choco beer dipping sauce to their doughnuts and it is everything Homer Simpson could ever dream of. Paddington’s Le Bon Choix do their doughnuts with the same amount of flavour and style that we have come to expect, and caramel and chocolate donuts remains the stellar standouts. But Brisbane’s most distinguished doughnut dealer would have to be Chester Street Bakery & Bar with salted caramel and nutella living it right up next to their traditional jam.

The classic doughnut’s Spanish sister has also made its mark on the dessert scene, and for the best place to get them it is a close tie between Freestyle Tout in the Valley and Chocolateria San Churro. Although San Churro wins for variety, every Brisbanite knows Freestyle has a way with dessert. Four churros rolled in cinnamon sugar with dark chocolate or caramel dipping sauce and vanilla bean ice cream is a win-win all the way. And newbie to the dessert scene, Cowch in South Bank serves up baked churros (not fried) sprinkled with cinnamon sugar alongside a chocolate shot for a walk through sugary heaven.

Finally, if there is anything on earth more heavenly than doughnuts, it’s their French-Creole cousin: the beignet. Best served hot first thing in the morning with café au lait, they’re quite a rarity in Brisbane. But by far the best place to get them outside of New Orleans is at Papa Jack’s in Fortitude Valley’s M&A. 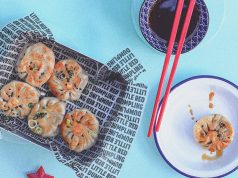 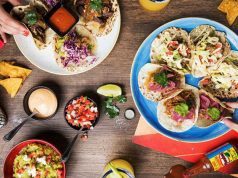