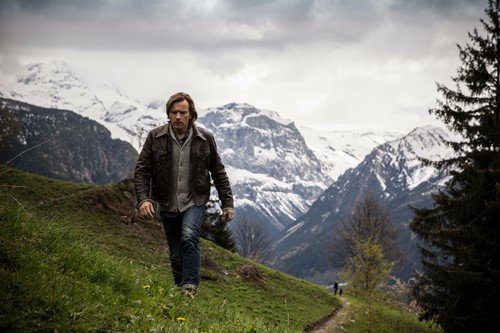 Real life former MI6 British Secret Service agent turned spy novelist John le Carré is no stranger to having his work turned into films. Having enjoyed a successful run as a critically acclaimed author since the early 1960’s, his tales of espionage have been turned into a number of widely praised and award-winning pictures, often attracting the most sought after actors and actresses working at the time. The most recent of these being 2011’s Tinker Tailor Soldier Spy and 2014’s A Most Wanted Man, OUR KIND OF TRAITOR is the tenth addition to the family, coming only six years after the novel was released.

Ewan McGregor is directed by Susanna White in the lead role of Englishman Peregrine “Perry” Makepiece, whom along with his wife Gail (Naomie Harris) meet and befriend a friendly and eccentric Russian man named Dima (Stellan Skarsgård) whilst on holiday in Marrakech, Morocco. Perry – a school teacher and Gail – a lawyer, are two ordinary British citizens who find themselves in deep water when Dima, who is revealed to be a kingpin money launderer with plans to defect, asks them for help. Part of the Russian Mafia, Dima has secrets upon secrets of dirty dealings, murders, and the accounts to billions of dollars of illegal funds. Being watched closely by his own entourage of people, and suspecting they plan to kill him, he takes a chance on Perry, whom he sees as the only man he can trust – as they’ve just met – enlisting his help and that of his wife to deliver classified information to the British Secret Services. The couple become embroiled in the world of international espionage and corrupt politics as they find themselves on an intense whirlwind journey spanning Paris, the French Alps and London as they are dangerously put in the middle of the Russian Mafia and the British Secret Service. Even with the help of an unrelenting vengeful MI6 agent, Hector (Damian Lewis), it isn’t clear who can be trusted or who’s playing who in this game of cat and mouse that’s both delightfully exciting and expertly engaging.

Extremely well acted by the ensemble of the four aforementioned actors, very clever and intelligently written dialogue is present throughout the script. Appropriately matching the novel with its tone of realism and spectacle, the great story benefits from having such high calibre performers breathe life into these characters. McGregor (Looking slick and dangerous with long hair) simply fits his role perfectly as a good samaritan trying to help a stranger in need, not realising the implications it may take on his life, somehow being relatable. Together with Harris, who kills it as usual, the two portray a convincing couple dealing with the strains of their ten-year marriage. Lewis makes his case well known for that of the next Bond, with a crisp and alluring deep voice so good you’ll wish you it was yours, in his vital and significant role. Skarsgård as Dima,though, comes away as the best character in the film, as the bad man turned good man, filled with regret just trying to do right by his family. Motivated by fear of his family being executed because of his mistakes, Skarsgård delivers a multi-layered performance with emotion, likability and a whole lot of humour. Finding room for comedy in a serious spy film is an effort in itself and every scene Dima is in, the film is the better for it.

Suspenseful as it is nail biting at times, the often great action set pieces are tied together nicely with beautiful and exotic locations. Great editing and cinematography going hand in hand with the intellectual and unpredictable nature of the narrative, this is a film that challenges you to put the pieces together in your head before it is revealed to you. A genuinely entertaining spy espionage thriller with twists and turns and a moral code about the importance of family, OUR KIND OF TRAITOR may just be your kind of movie.

The Family Law: When Sunnybank Comes To SBS