A Saturday night in the River City, dark clouds hang heavy and a chill breeze whispers a warning of the rain to come. Four friends meet by the train tracks of Fortitude Valley, before slipping into a large industrial brick building that once manufactured ice and cold storage.

What drew these four friends there that night? Let’s play a game…

The truth is they were heading in to the new Stone & Wood Tap Room in Brisbane. That’s right, Stone & Wood have shaken off the sand of its Byron origins and have slipped into something a little more urban.

Set inside the heritage-listed Trails Ice building in Fortitude Valley, drinkers can enjoy the core Stone and Wood range, limited beer releases, one-off experimental brews and for those not on the froth, they also serve an impressive range of wines.

Our four heroes (Let’s call them S, A, W and B*) each entered with different expectations, different tastes, and different preferences for what makes a great night, but Stone & Wood had something for everyone.

S: Hates beer but likes cider or ginger beer. Refuses to eat anything at a restaurant they could’ve made at home.

A: Likes beer, but it’s not their go-to. Has kids, so any chance for a night out is not to be wasted. Easy to please with food.

W: Likes beer, but had to drive, so needed to keep good track of their intake. Has a soft spot for anything that supports a greater purpose.

B: Loves beer! Nothing fruity or weird though. Also works with chefs for a living, so can be picky when it comes to food.

On this Saturday night, there were the nine core Stone & Wood range beers, as well as six limited release/ experimental brews. Our four heroes tackled their fair share of the tasting menu:

S: Being not much of a beer drinker, left the core range untouched. Instead they ventured to try the more experimental flavours like P.O.G Sour (turning real passionfruit, orange, and guava into a tart fruity punch). Of the four, J was the only one to really enjoy the sweet-sour kick of the P.O.G. But the greatest treat for them was trying the latest release alcoholic ginger beer – Little Dragon.

A: Their first stop was the Treehouse Cider (made with 30% red apples for more sweetness, and 100% QLD apples for more fresh local flavour). TBH the cider was also their second and third stop – it was just so good. When they finally made it round to tasting a beer, they were intrigued by the ‘made with liquid nitrogen’ sign that accompanied the pilot batch of Cryogenics (a low bitterness and fruity IPA). They probably did try a few of the other beers too, but the Cryogenics was a definite delicious stand out.

W: Was already a big fan of the Stone and Wood core range, but really enjoyed drinking the newest member of the family East Point off the tap (a lower-alcohol beer with a zesty tang). Sticking with the lower alcohol theme (they were driving after all) S also really enjoyed the Garden Ale (an easy bitter finish and at just 3.5% alc/vol).

B: They probably tried the most of all the flavours of the four. Their face pinched up at the fruitier flavours of the experimental batch of Vegan Mango Milkshake (a fruit IPA inspired by mango ice cream), but the balanced flavour profile of the Green Coast (subtle hops with full malt palate) was their favourite of the night.

Complementing the diverse range of beers is the canteen menu which features the best in local produce, proudly presented by William Wallace Catering. With such a great food partner on board, Stone & Wood Brisbane are not only serving up delicious lunch and dinners, but they can also provide event spaces and function packages for 20 to 200 guests.

Arriving in time for dinner, our heroes were famished. Ordering four of the dishes off the menu, the conversation lulled as their mouths were distracted by the amazing food on offer:

S: Walked in worried they’d be looking at an everyday pub-food menu but was enchanted to see nary a chicken-parmy in sight. All the food was lavish and delicious, and they couldn’t get enough of the sauce accompaning the Chargrilled Lamb Belly.

B: Absolutely raved about the Grilled Chicken breast with toasted corn, chilli & piquillo pepper salsa and pearly cous cous. They said it was the most well thought out and well spiced dishes they’ve had in [email protected]#%’n years!

There’s not a surfboard in sight, but this brewery is still made for those Stone & Wood moments. An innovative, industrial space with sleek polished concrete floors, balanced with warm wooden high and low tables.

A busy Saturday night, the high-ceiling space was full of loud chatter and laughter.

A: Found they had to shout a little to be heard across the table. But was thrilled to be out in the heart of the Brisbane night scene – or really anywhere they didn’t have to bring crayons and colouring books to keep kids happy.

W: Was wowed by the amazingly friendly and passionate staff. Loved how knowledgeable they all were about food and drink selections, as well as their socially conscious business activities.

Stone & Wood’s new Brisbane Tap Room is a place for casual mid-week work drinks, Friday afternoon knockoffs and weekends out in the Valley. For our four heroes it was a place to slow down after a long week, and catch-up over a brew or two.

Why not get down to Bridge Street and be the hero of your own Stone and Wood story?

*S, A, W and B are the not so real names for four very real people. Jacynta Clayton
As a child, Jacynta wanted to be a mermaid when she grew up - or a writer. As she got older and discovered seashell bras to be impractical professional daywear, she began focussing on writing. With degrees in both psychology and professional writing, she uses her powers for good to help give unique and resounding voices to her stories. 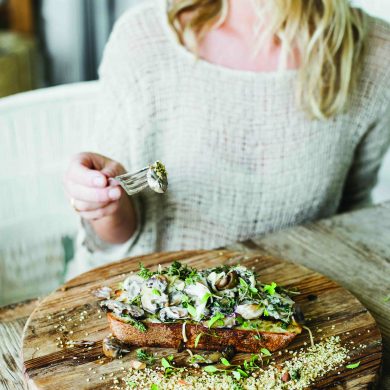