Gold Coast local turned international star, Amy Shark is about to head out on a national tour supporting her new album Cry Forever. Shark became a household name in 2016 with the release of her breakout hit ‘Adore’, and has since worked with international artists and producers, including Mark Hoppus, Jack Antonoff, and Joel Little to name a few.

The Cry Forever Tour starts on June 11 in Newcastle and will be Shark’s largest tour to date. She’ll be performing at HOTA Gold Coast on June 25 and Riverstage in Brisbane on June 26. This will be one of the first arena tours globally since COVID-19 struck last year and will be held with a commitment to a COVID Safe environment. “I was willing to do whatever it took to get this tour on the road. I’m so excited to play my biggest shows to date and am currently putting together a rather impressive show for you!” stated Shark.

Her sophomore album, Cry Forever, includes the singles ‘Love Songs Ain’t For Us’ featuring Keith Urban and cowritten by Ed Sheeran, as well as ‘C’MON’ featuring Travis Barker. This album pulls back on production compared to her first album, Love Monster. The most honest and vulnerable lyrics she has ever written are supported by seductive melodies that stand on their own. Shark proves in this album that she is a powerhouse musician without relying on production to back her up.

I had the pleasure of chatting to Amy on the phone about her new album and upcoming tour, and what it was like working with Ed Sheeran and Keith Urban.

Tayla Reilly: Hi Amy, how are you going?

Tayla: I’m good, thanks. Thanks for talking to me today.

Amy: Thanks for talking to me today.

Tayla: Let’s talk about your tour. It starts next week, a national tour. How does it feel to get back on the road again?

Amy: Well, I think it’ll really sink in once I’m actually at the venue doing soundcheck. It’s just been so long since I’ve done my own full production show, so we’re all very excited. That’s probably the one good thing COVID offered was time to really get to know these songs and work out the best possible setlist. So, I think we’re more than ready to do it. We just need to be allowed to do it and it’s looking really really positive. So, exciting.

Tayla: Are there any cities or venues in particular that you’re looking forward to getting back to?

Amy: Yeah! I mean, it’s a bit of a sick state right now, but Melbourne. I’m really looking forward to playing Rod Lavor. You know, I never thought I’d ever play a venue of that size. And Melbourne, ever since I started, it was sort of on board. But everywhere. Tickets are selling really fast everywhere, so I think it’s just going to be a really great vibe on the whole tour.

Tayla: The tour follows the release of your new album Cry Forever. What was the inspiration for the album?

Amy: I didn’t really sit down and think what am I going to write this album about? I kind of accidentally started writing it when I was touring my last album. I feel like that’s the best way to go about putting together bodies of work ’cause it’s less pressure, and I feel like I get real honest songs out of me if I just write when I feel like writing, when I feel really hypersensitive or lonely or happy or whatever. I just try and capitalize on that. So, the vibe of the whole album was a lot more current. Still some topics from the past come into play sometimes, but I feel like this album was a lot more of where I am now as an artist and the highs and lows of that.

Tayla: This new album – it’s a lot more stripped back compared to your first album. What caused that change in production?

Amy: I think it’s just confidence and learning. As much as I love the first album and the first EP, you get to a stage where you want to test new things, and I think the main thing I wanted for this album was to have a body of really strong songs, and songs that I could play on acoustic guitar, and have melodies that can stand on their own and not lean on production as much as what I used to. I used to not really be confident enough to have a song that I thought could be bare bones. I used to always think Oh no, it’s a good song but it’ll be even better once I get a big beat on it or big production. I just really wanted to trust myself a little more on this one.

Tayla: One of the singles on the album called ‘Love Songs Ain’t For Us’ features Keith Urban and was co-written by Ed Sheeran. What was it like getting to work with Ed?

Amy: It was a dream, actually. I still think it’s wild that it even happened and that we talk on email. Anytime his name pops up it’s just so weird for me! But he’s amazing and that’s why he’s so successful, it’s ’cause he’s just such a legend of a guy. Really professional, great at what he does, and he loves it, it’s not a job for him. He really loves writing songs and I think that’s why we connected. He’s so respectful. He’s built this really warm environment to exist in in his little world over there – or big world should I say. He’s just got the right people around him, and it was really great to be one of those people for a couple of days.

Tayla: And the song features Keith Urban. What was the decision to have him on the record?

Amy: I’ve been really lucky with who I’ve met along the way, and Keith asked me to perform with him at the 2018 Aria Awards and we kind of just hit it off. He’s so funny and he’s just full of great wisdom and advice. I was so late to country music and to Keith Urban until we met, and then – the way this song was sounding – it was kind of like a stroke of genius when his name got thrown in. I was like Of course it has to be Keith, it’s a no brainer! And I was lucky that we’ve built a great friendship so I could just text him the song and see if he was interested, and luckily, he was. So, it was really easy.

Tayla: The song goes with a really beautiful music video, as well. How does the video connect with the songs meaning?

Amy: Thank you, I think it’s stunning, as well. I think it just needed to be in its own world. The song is about finding someone you can be in this sanctuary with, this safe haven, and that’s kind of where the video was. It’s like walking through these weird and wonderful worlds where people have found someone they connect with and can honestly be themselves with, and that’s the whole vibe of the song.

Tayla: You’ve started a docuseries on YouTube. What was your motivation behind creating that?

Amy: As the album was coming together really early on, I was really excited about the songs, and then the opportunity came to build a studio in my house, and I thought that would be really interesting. Over the last EP and album, I was just – I don’t know… You go through these times where you read a bunch of negative comments about me leaning on producers and the reason I have got where I am is ’cause I work with such and such producer. I kind of just wanted to… I guess flex a bit and show how involved I am. You know, you can work with whatever producer you want, but I’m the missing ingredient for these songs. I write them and I’m there the whole way. So, I guess it was just me trying to shut people up but also give young artists encouragement to get in there and own their shit.

Tayla: Do you have any advice for musicians that were in the same position as you a few years ago?

Amy: Yeah, the main thing – obviously, it’s a question that gets asked a lot, and there’s no quick way to this industry. It’s seriously just good songs. And I feel like if you’re doing it for the right reasons, and you love writing songs, and you’re being honest about them, I think that’s the only way anymore – to just be believable and compelling. I always say just make sure, really have a look in the mirror and just double check that you’re doing it for the right reasons and not for fame or followers or money, because you’ll just come undone.

Tayla: Do you have any favourite songs on the new record or any that you think might be fan favourites?

Amy: It’s so hard ’cause all of them mean different things. For me, I love playing guitar and I get to play guitar a lot more on this album. There’s a song called ‘Never Meet Anyone Like Me Again’ and I really love that song. I love how stripped back it is. I love this song called ‘Miss You’. I think it’s super sexy and a bit of a banger. But I don’t know. Every time I look down at this set list that we’ve done for the tour, I get really excited before every song!

Tayla: What are you listening to at the moment?

Tayla: Awesome, thanks for chatting to me today, Amy.

Amy: No worries, appreciate it.

Amy Shark will be playing at HOTA Gold Coast on June 25 and Riverstage Brisbane on June 26. You can find tour and ticket information at www.amyshark.com. 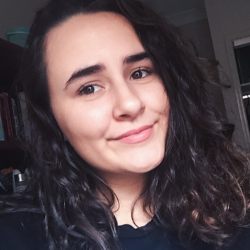