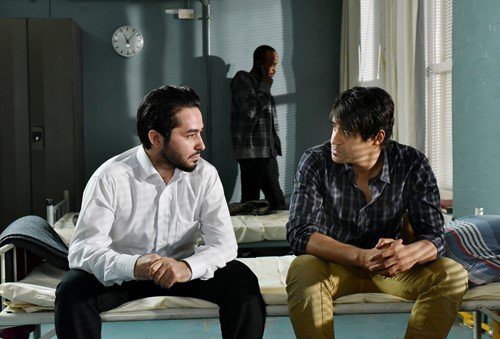 Featured in the 2017 Volvo Scandinavian Film Festival, award-winning filmmaker Aki Kaurismäki returns with his trademark brand of deadpan humour for the heart-warming tale, The Other Side of Hope. Kaurismäki’s latest work tells the story of Wikström (Sakari Kuosmanen), a travelling business shirt salesman come restaurateur, and Khaled (Sherwan Haji), a Syrian refugee seeking a new life in Finland.

Khaled arrives in Helsinki hidden aboard a coal ship– cold, alone, and looking for his lost sister. After surrendering himself to the authorities, Khaled meets other refugees who, like him, are fleeing their war-torn homelands in search of a better life. Khaled’s bid for asylum is soon rejected and he is forced to make a decision– return to Syria and risk death or flee to the streets of Finland as an illegal immigrant. At the same time Wikström is trying to turn his life around. After a marriage breakdown and a failing career as a salesman, he cashes it all in for one last play at happiness.

The film follows the parallel journey of these two unlikely protagonists as they struggle to find their place in a new world and eventually find each other and salvation in Wikström’s new business venture, The Golden Pint. It is also here, amidst the moody Nordic setting, that Kaurismäki brings to life his cast of motley characters, each adept with their own quirks that carry the tragedy and comedy of the story in classic Kaurismäki style.

Like so many other of Kaurismäki’s films, The Other Side of Hope explores what it is to be human and is unafraid to delve deep into the darkness and the light within each of its characters. The film invites viewers to experience life as an outsider, to understand what life is really like for those living on the fringes of society. The Other Side of Hope is a subtly striking film that tackles the European refugee crisis without reservation, shining light on life’s hardships and the triumph of the human spirit.